Seaweeds are well-known to be important primary producers in coastal waters, but they may potentially also play a role in providing refuge from ocean acidification. Macroalgaes such as Laminariales and Fucales, both of which are brown algaes, are ecosystem engineers that influence factors such as water velocity, light penetration, and chemical characteristics of seawater (e.g. via carbonate chemistry, and oxygen and nutrient availability).

Figure 1. A) Ecklonia radiata. B) ephiphyte. While epiphytes come in many shapes and sizes, ranging from looking like hair and snot, to being delicate and flowerlike, they normally grow on top of another plant. Note the epiphyte shown in B is not the epiphyte found on Ecklonia radiata in this study.

The diffusive boundary layer (DBL) exists at the surface of the leaf blade and is the area of the most rapid and variable fluctuations. The DBL is formed when a fluid moves over a solid and no-slip conditions create a region of viscously-dominated laminar flow. Here movement of ions and molecules is by molecular diffusion and the metabolic activity of the organism, in this case, seaweeds, creates a concentration gradient from the uptake and release of dissolved substances to and from the surface of the leaf blade. DBL microenvironments are not only important in the transfer of nutrients and metabolites but are also critical for timing of gamete release and keeping antifouling agents at the blade’s surface. Many organisms such as bacteria, diatoms, various larvae, annelids, and other algae live in this layer.

Over the next century the pH of seawater, on average world-wide, is expected to be reduced by 0 .1-0.3 units. While this change seems to be small, this is in fact quite drastic and will greatly impact corals and their ability to pull calcium carbonate from the water, which is the major component of their exoskeletons. The goal of this study, from Noisette and Hurd (2018), was to: a) study the characteristics of thickness and concentration gradient of DBL at the blade surface of Ecklonia radiata and b) determine the characteristics of DBL in predicted future conditions.

Eighty blades of algae were taken from in situ locations in Hobart, Tasmania, Australia. In the lab, the blades were kept at 13°C and in low light conditions. Different combinations of light, mainstream pH, flow, and epiphytic conditions were evaluated with four blade replicates. Data was then analyzed for significance using three-way ANOVAs with pH, flow, and presence/absence of epiphytes. A three-way MANOVA was then used to compare coefficients of curves fitted to the profiles. 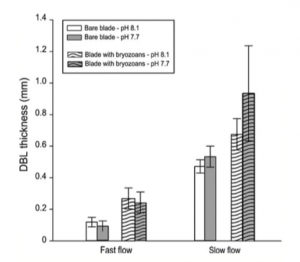 It was found that pH did not affect DBL while flow and epiphyte presence did. DBL was thicker in slow flow conditions, as well in epiphytic conditions. It was also found that oxygen profiles were steeper in fast flow treatments. Noisette and Hurd also found that epiphytes decreased the oxygen content of the DBL under dark conditions.

It was noted in particular that DBL thickness increased in slow flow because the DBL of the blade and epiphytes actually merged. Metabolic activity of both epiphytes and algae led to variations in oxygen concentration and pH in the DBL which offers potential refuge from future ocean acidification. While blades with epiphytes did have larger DBLs, net photosynthesis was lower due to epiphytes using oxygen produced by the algae and potential shading of the algae that might reduce the efficiency of photosynthesis.

Noisette and Hurd mention that organisms that regularly encounter strong fluctuations, like nearshore algae, might be better able to survive a lower pH of seawater due to higher phenotypic plasticity. DBLs might thus act as refuges for calcifiers and other organisms by allowing them to adapt to lower pH conditions over time. While this offers some room for adaptation of important oceanic organisms, it comes on a small scale. This could be the difference between complete breakdown of ecosystems and hanging on by a thread.

Climate vulnerability and resilience in the most valuable North American fi...
Scroll to top