Lobster could be considered one of the most important U.S. fisheries, comprising over $1.5 billion in landed value between the U.S. and Canada in 2015. However, lobster harvests are susceptible to fluctuations in water temperature caused by global climate change. Recent warming of the northwest Atlantic coupled with different fisheries management approaches in the Gulf of Maine (GoM) and southern New England (SNE) led to record breaking landings in the GoM and collapse of the lobster fishery in SNE. In this paper, Le Bris et al. (2018) examine why the GoM’s focus on protecting large lobsters allowed it to capitalize on warming waters while SNE fisheries suffered. 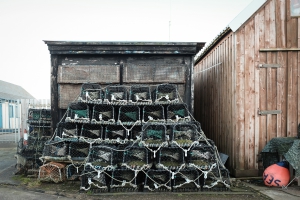 Figure 1. Lobster traps in a stack

Increased ocean temperatures have impacted the two regions in different ways. Warmer waters in SNE have been linked to decreased juvenile habitat and higher rates of epizootic shell disease, while warmer waters in the GoM have been linked to increased juvenile habitat and a loss of large bodied predators. Fisheries management approaches also differ between the two regions; the GoM is divided into smaller “local lobster zones” that are managed by fishing effort controls and size limitations instead of the quota system. To examine the effects of these management approaches and climate change more closely, the authors created a model integrating the impacts of ocean warming, fishing pressure, and predator density on lobster population dynamics across a wide range of habitats. 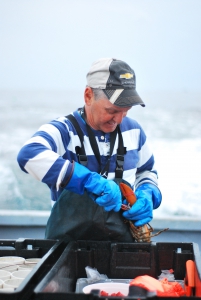 Figure 2. A man harvesting a lobster.

This model estimated that mean abundance increased by 515% in the GoM from 1985 to 2014, while mean abundance in the SNE stock declined by 78% from 1997 to 2014. Increased water temperatures was the largest factor driving this divergence, leading to a greater production of 1 year old lobsters per egg in the GoM but exceeding the thermal optimum for lobster recruitment in SNE. Removal of large predators in the north and shell disease in the south further exacerbated these trends. Furthermore, the V-notching program to preserve reproductive females is mandatory in the GoM but voluntary and less widespread in SNE. Without V-notching in the GoM, the model estimated only a 242% increase in lobster stock, whereas if more stringent conservation methods were in place in SNE, the model estimated a decrease of only 57% instead of 78%. Looking forward until 2050, the model predicted a decline in GoM stock due to temperature fluctuations that could be mitigated by continued protection of reproductive females, whereas SNE stocks could recover somewhat due to increased conservation but never back to mid-1990’s levels. 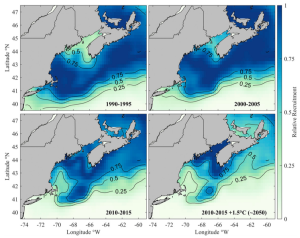 There are limits, however, to be aware of with this model, such as the coarse resolution of climate models, an assumed independence of lobster population units, a lack of consideration for rapid evolutionary adaptation, and the assumption that temperature is the only climatic stressor on lobster populations. Despite these limitations, Le Bris et al. conclude that proactive fisheries management strategies based on biological principles can lessen negative ecosystem changes and increase positive ones. However, reliance on a single fishery is risky, and diversified economic opportunities should be adopted in the uncertain face of future climate change.

The Role of Macroalgae in the Ecosystem