Submerged structures such as ships, steel frames, or boulders placed on the seafloor deliberately to mimic attributes of a natural habitat are known as artificial reefs (ARs). Since the development of the National Fishing Enhancement Act of 1984, most AR construction in the United States has been focused on enhancing fishery resources and opportunities (Logan & Lowe 2018). These ARs provide new habitat for both fish and benthic organisms to colonize, which increases food resources and overall fish biomass. However, to establish reef productivity for mobile species it is pertinent to know when and for how long species are resident to a reef, which has historically been overlooked by previous AR studies.

The largest constructed rock reef in the US, the Wheeler North Artificial Reef (WNAR) off the coast of San Clemente in the Southern California Bight, was built by the Southern California Edison Company (SCE) as mitigation for the loss of the San Onofre Kelp Bed after discharged cooling water from a nuclear generating station resulted in restricted giant kelp growth and subsequently the loss of species diversity (Figure 1). For SCE to receive mitigation credit, WNAR must either meet or exceed the abiotic and biotic performance standards relative to community performance from two nearby natural reefs, the San Mateo Kelp Bed (SMK) and the Barn Kelp Bed (BK).

In a recent study, Logan & Lowe (2018) examined the movement patterns of three economically and ecologically important fishes, the kelp bass (Paralabrax clathratus), the barred sand bass (P. nebulifer) and the California sheephead (Semicossyphus pulcher) within WNAR. 195 fish were captured, tagged with acoustic transmitters, released, and monitored by underwater receiver stations for a study period of two years to determine residency indices (Figure 2). When examining these indices, the authors concluded kelp canopy surface area was the single environmental parameter that explained the most variation in residency. This makes sense considering previous research demonstrates that artificial structures with high vertical relief provide important habitat conditions, including refuge from predators, for many species (Martin & Lowe 2010). 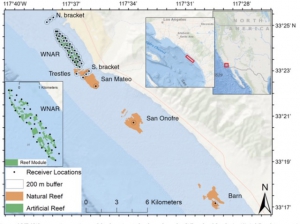 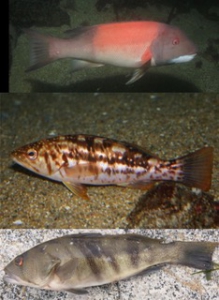 After analyzing movement patterns of the tagged fish across WNAR, SMK and BK, this study suggests that during favorable conditions fish were highly resident to WNAR and demonstrate that it is currently functioning similar to the surrounding natural reef habitats, effectively reaching the set performance standards. In addition, the results reveal that future AR management plans in California would be most successful when implementing structures that are ideal for giant kelp growth to aid in increased species diversity in abundance by providing an ideal habitat for important species.

Climate vulnerability and resilience in the most valuable North American fi...