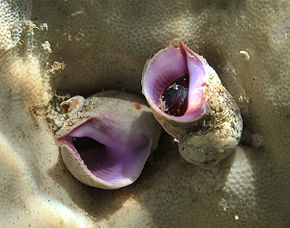 Logically, one might think that as a population of predators increases, the population of its prey decreases. This has been found to hold true for all species, including corals and their predators (corallivores). Larger, more recognizable corallivores, such as the crown-of-thorn sea star and horn drupe snail, can very negatively impact the composition and tenacity of corals. However, little is known about the impact that smaller corallivores, such as the Coralliophila violacea (violet coral shell snail), can have on coral species and habitats. 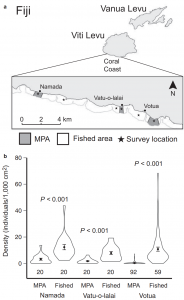 In a study done by the Georgia Institute of Technology, a combination of observational and manipulative experiments were performed to look at how C. violacea densities and size frequencies, measured as shell height, impacted their common host coral Porites cylindrica’s ability to grow and survive in three different fished areas and Marine Protected Areas (MPAs) of Fiji.

In each of the three MPAs and fished areas, C. violacea densities were found to be 35-fold higher in the fished areas, but snails in the MPAs were significantly larger in size. As densities increased, and thus feeding on P. cylindrica increased, P. cylindrica growth was found to be extremely inhibited, supporting the hypothesis that smaller species can have a large, negative impact on their environments.

The decrease in the effects of C. violacea in MPAs make a concrete argument that MPAs are successful ways of protecting marine wildlife and that more should be created all over the world. Current MPAs are, for the most part, small in scale and while they are effective, larger scale protected areas would increase the protection of all sorts of vulnerable organisms, including vital coral species.

The way that C. violacea impacts corals so significantly is by its intrusive method of feeding. When preying upon corals, C. violacea will insert its proboscis, a tube-like structure that aids in feeding, into the coral’s polyps and feed on the nutrients that the coral is transporting. This method is detrimental to the coral as it decreases the amount of nutrients that the coral itself intakes and suppresses its growth.

Keeping an eye on how smaller corallivores are impacting coral ecosystems is crucial because as our planet continues to warm and oceans get more acidic, coral populations become increasingly susceptible to bleaching and extinction, facing threats not only from predators but human induced climate change as well. The combination of these factors could lead to an underwater ecosystem devoid of corals and, in turn, of marine life in general.