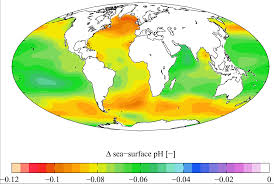 Climate change is becoming an ever-more pressing concern. The concentration of atmospheric carbon dioxide (CO2) has rapidly increased to about 400 ppm in 2015; this is the highest it’s been 800,000 years (Luthi et al., 2008). When we think about the effects these high concentrations have on our earth’s systems, we might only consider the atmosphere and weather patterns. However, it is important to remember that the ocean is the largest carbon sink on earth. We are already starting to see the effects of increased carbon dioxide concentrations, as well as increased partial pressure coming from CO2, in the form of ocean acidification and coral bleaching. However, not much information has been gathered on the effect of increased partial pressure from carbon dioxide (PCO2) on fish metabolic performance, which is an important benchmark of their ability to survive. Kelly D. Hannan and Jodie L. Rummer’s study is a meta-analysis of the work that has been done on this subject. Data analyzed included both saltwater and freshwater environments. However, it is difficult to predict how rising CO2 concentrations will affect freshwater systems due to their high variability. Overall, it is predicted that increasing CO2 concentrations will affect the calcification rates, growth, reproduction, and immune functioning of organisms. It has been observed that marine and freshwater fish can physiological compensate for extremely high levels of ocean acidification, but behavioral defects have also been observed. Therefore, “these behavioral impairments demonstrate that despite fish being efficient acid-base regulators, they may not be as tolerant to acidosis as previously predicted” (Hannan and Rummer 2018). Acid-base regulation requires energy and can be metabolically taxing. The delivery of oxygen (O2) to tissues can result in maintained or increased aerobic scope across a wide range of teloest species (aerobic scope refers to the total aerobic energy available to an organism above basic maintenance costs for basic life-history processes and can be used as a measure of health). The goal of Hannan and Rummer’s meta-analysis was to see what other mechanisms were used by both freshwater and saltwater fish to combat the effect of increased CO2.

To begin this meta-analysis, search engines such as Google scholar were used to look up studies using key words such as “teleost”, “Oxygen consumption”, “aerobic scope”, “ocean acidification”, and “Carbon dioxide”. From the results that the search engines generated, all studies that investigated the effect of elevated PCO2 on oxygen uptake in fishes were reviewed. The researchers analyzed the pH range, PCO2 range, the species assessed, the life stage, the length of PCO2 exposure, the ecosystem, and the type of response from each one of the papers to find trends and commonalities. Of the 26 instances where responses to elevated PCO2 , the majority (73.1%) reported no effect on Aerobic scope. 15.3% reported a decrease in aerobic scope and 11.5% reported an increase. These results reinforce the idea that fish are efficient regulators and can withstand pressure from differing pH conditions in their environments. However, it is important to note that the majority of the species analyzed were adult teleosts (bony fish). Furthermore, because the meta-analysis looked at different studies which used different methods, there are gaps in data that make it impossible to get a whole-picture analysis of animal performance and fitness. This lack of holistic information will make it difficult to draw predictions on how fish populations will be affected by ocean acidification in the long term. The majority of animals studied where teleosts, who are known to benefit from the Root effect. Yet, in the elasmobranchs that were included there still seemed to be resistance to changes in Aerobic scope in response to increased PCO2 (Di Santo, 2015, 2016; Green and Jutfelt, 2014). Because it is known that Elasmobranchs (sharks, skates, and rays), do not possess the Root Effect, this suggests that they have different mechanism contributing to their maintained aerobic performance. It is possible that Oxygen uptake levels have a genetic basis. Other gaps in the literature included studies relating to freshwater fish. Predictions regarding how PCO2 will affect the aerobic scope of freshwater fish are limited and variable and this is an area that requires further investigation. In addition, data relating to PCO2 effects on oxygen uptake in larval and embryonic stages are also lacking. This is significant because it is well known that these early life stages are some of the most sensitive to environmental perturbations. It is clear that there are many gaps in the literature regarding metabolic responses to increased PCO2. The general trend suggests that, in adult teleosts, at least, aerobic performance is mostly maintained. Although this may sound like good news, it is important to remember that more data and information is still needed and that the effects of increased PCO2 may affect fish populations in the long term and across generations.

Analysis of: Dealing with Mediterranean Bluefin tuna: A study in international...
Scroll to top