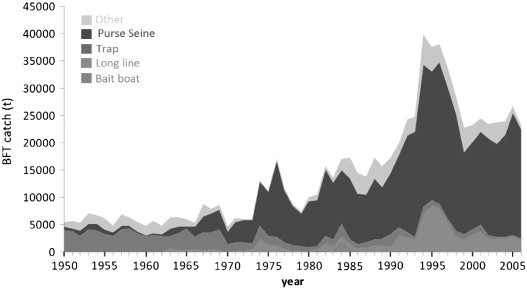 Bluefin tuna is a highly migratory species that can live up to 30 years, currently are listed as endangered under the International Union for the conservation of nature (IUCN; Collette et al. 2011). This is due to the fact that the demand for Bluefin tuna has risen dramatically since 1980, when sushi and sashimi became increasingly popular in Japan. In the 1990’s, catches increased from 9,000 to 40,000 tons per year, and eventually leveled out around 24,000 tons per year. This graph shows how catches of Bluefin tuna have increased rapidly beginning in 1980 (Sumaila & Huang, 2012).

Bluefin tuna are caught using purse sein nets and are often held there for weeks to months to fatten them up, in a practice called tuna ranching. This is done since tuna cannot be easily farmed, due to the fact that they need specific habitats for different life stages. Due to all of these factors, Bluefin tuna stocks have been severely depleted and there has been little success in managing their stocks.

A main issue with Bluefin tuna fishing is that it has been difficult to set quotas and enforce regulations due to the fact that they are highly migratory, and constitute as a straddling stock, meaning that the area they cover is over two or more nation’s exclusive economic zone (Heffernan, 2014). Under UNCLOS, this means that the nations must coordinate management efforts, but this has been ineffective. Since the UN has done little to protect tuna, since they are unwilling to compromise the value it brings to the world trade, the ICCAT, or the International Convention for the Conservation of Atlantic Tuna, was formed. This organization has 48 member nations, and its main objective is to provide quotas to each nation with fleets to fish Bluefin tuna. However, it has been found that the quotas set by ICCAT in 2010 were 70% higher than scientific recommendation (Sumaila & Huang, 2012). Many nations see this as a failure to conserve the threatened stocks. It has also been observed that dividing the quotas for Bluefin tuna may also be an ineffective way to manage the stocks, since there has been reported of stock trading, or nations without quotas fishing under a different flag. This is harmful to the stocks since regulations cannot be decided by one or two nations, but instead must be coordinated between the dozens that receive quotas (Heffernan, 2014).

In addition to nations constantly exceeding their quotas, there is another issue of illegal, unregulated and unreported fishing. This fishing is not included in the annual catch statistics because it is not reported to the ICCAT. This fishing has been estimated to exceed the quotas of all member nations by 62% (Heffernan, 2014). The issue of illegal fishing is so prevalent for Bluefin tuna because of its immense value. Another issue lies within the UN and ICCAT, since there are no strong enforcement measures in place to deal with the illegal fishing. A main policy tool suggested by Sumaila was to increase the penalties for illegal fishing and exceeding quotas. If there are stronger enforcement measures for Bluefin tuna fishing, fishers will be less willing to exceed their quotas. Currently, it is more economically beneficial for the fishermen to exceed their quotas even if the ICCAT finds out than to fish sustainably due to the lack of punishment as well as the high value of Bluefin tuna.

It has been made clear that Bluefin tuna management needs improvements in order to conserve the endangered population. Sumaila & Huang proposed many policy options that would help to regulate fishing, including at-sea inspections sites. This would prevent fishermen from lying about their catch numbers. These could be enforced by the ICCAT. However, it is noted that ICCAT does not have control over non-member nations, which creates an issue. It is suggested that the ICCAT should seek legal rights to manage the world’s tuna populations, in order to prevent non-member nations from continuing to overfish. Another suggested policy option would be to implement marine protected areas (MPA) in known tuna spawning grounds. This would be especially useful for Bluefin tuna, since they aggregate in specific areas to spawn, making them easy targets for fisheries. If their spawning grounds were protected, their population numbers would increase since they would be able to reproduce without the pressures of fishing (Sumaila & Huang, 2012). Bluefin tuna stocks have been drastically declining, and this is heightened by the fact that their reproduction rates have also slowed, due to declining stock biomass (Sumaila & Huang, 2012).

One of the most surprising policy recommendations has recently been proposed for Bluefin tuna management. Their numbers have dropped so low that it has been proposed to add the species to CITES (Convention on International Trade in Endangered Species of Flora and Fauna). This is extremely rare for a commercially important species, since this protects against fishing pressures. However, this has been opposed by Japan, the highest importer of Bluefin tuna (Webster, 2011). When this was proposed, the fact that ICCAT is an ineffective manager of Bluefin tuna came into the spotlight. Due to this pressure, ICCAT lowered their quotas to scientific recommendations and enforced stricter regulations on catch limits (Webster, 2011).

Since Bluefin tuna became commercially important, their management has been handled poorly. In order to conserve Bluefin tuna, the ICCAT must become a more powerful management organization. Stricter regulations must be implemented and penalties for overfishing need to be enforced. If these changes are made in the management strategy, Bluefin tuna populations can be sustainable without completely collapsing, which is currently a very real possibility.