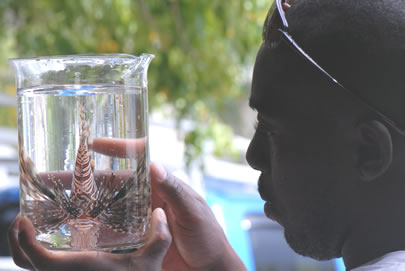 Lionfish are originally from the Indo-Pacific and Red Sea, but they have recently invaded Atlantic waters near Florida and the Caribbean and into the Gulf of Mexico (“Lionfish- Pterois volitans”). Lionfish were some of the most commonly imported tropical fish for aquariums; however, owners would often release them into the Atlantic when they grew too large for their aquariums (“Venomous Lionfish”). Lionfish were first reported off Florida’s Atlantic Coast near Dania Beach in 1985, and since then the lionfish populations have exponentially increased and spread (“Lionfish- Pterois volitans”). [Picture 1: In the summer of 2001, this lionfish was found about 40 miles off the coast of North Carolina.]

Lionfish have an extremely high success rate for a variety of reasons. Since the lionfish are not natively found in the Atlantic waters, they have no natural predators in this region to control their populations. Lionfish have 18 venomous spines that are used as a defense mechanism (“Lionfish- Pterois volitans”). Any native predators that have unknowingly tried to consume this new food source has fallen victim to their venomous spines. The lionfish also breed at a very rapid pace because both males and females sexually mature in less than a year and have the ability to spawn 12,000 to 15,000 eggs every four days in warm climates (“Lionfish- Pterois volitans”). Lionfish have quickly spread their populations throughout the Atlantic because are tolerant to a variety of habitat conditions. They have been found in shallow waters and in depths up to 1,000 feet; they can withstand temperatures as cold as 48 to 50 degrees; and they can survive in low salinities for short periods of time (“Lionfish- Pterois volitans”). Lionfish have easily assimilated into Atlantic waters, but the main concern about the lionfish is their broad diet that negatively impacted the native ecosystem.
Lionfish hurt the wellbeing of coral reefs because of their massive predation of native species, and they compete with the native predators for food. As a predatory reef fish, lionfish are known to prey on more than 70 marine and invertebrate species including yellowtail snapper, Nassau grouper, parrotfish, banded coral shrimp, and cleaner species (“Lionfish- Pterois volitans”). These feeding habits drastically reduce the native populations in coral reefs, which result in negative effects on the reef habitat. Some of the species targeted by the lionfish play important ecological roles in limiting the amount of algae on the reefs, and without their presence, the coral reefs can be overgrown by algae (“Lionfish- Pterois volitans”). Lionfish often target the native juvenile species as another source of food. Albins and Hixon (2008) found that lionfish caused significant reductions in the recruitment of native fish by an average of 79% over a 5-week study period. Targeting the coral-reef fish at the early stages of life declines the abundance and diversity of the local fish (Albins and Hixon, 2008). Complete eradication of lionfish from the Atlantic and Gulf of Mexico is probably unobtainable; however, efforts need to be made in order to control their rapidly growing populations.
There are a couple solutions that can be implemented towards the extermination of the invasion of lionfish. The first step that must be taken is to educate the public about lionfish in the Atlantic and Gulf of Mexico and the damaging effects they have on the natural ecosystem. Local fishermen should be encouraged to remove any lionfish that they catch to help limit the negative impact this species has on the native marine life (“Lionfish- Pterois volitans”). Commercial fisheries and recreational fishermen should also be encouraged to target lionfish as a main catch (Hixon, Albins, Redinger, 2009). When filleted and cooked properly, lionfish are very delicious. This species could be profitable to fisheries if they target to catch and sell them as a form of sustainable seafood. The recovery and maintenance of healthy populations of native predators, such as large grouper and sharks, can help regulate lionfish populations as well (Hixon, Albins, Redinger, 2009). Lionfish population controls can be regulated on a regional and nation wide level. Regions need to ensure that they are prioritizing the removal of lionfish from key areas such as marine protected areas (MPAs), high tourist areas, spawning aggregation sites, and nursery areas (Akins, 2012). These regions are extremely vulnerable to the lionfish, and an invasion by these predators could be detrimental to the recruitment and survival of local reef fish. A nation wide control effort of the lionfish in the Atlantic could help to reduce the lionfish in mass quantities (Akins, 2012). However, in order to monitor the progress of the nation’s control plan, commercial and recreational fishermen and scientists need to continue to report and document the lionfish caught in order to gauge the effectiveness of the implemented programs (Akins, 2012). [Picture 2: A Virgin Islands biological technician examines the Indo-Pacific lionfish captured off the coast.] By enacting some of these invasion control plans, the lionfish population can be better regulated, and the coral reefs and native species would be better preserved.
Works Cited
Akins JL (2012) Control Strategies: Tools and Techniques for Local Control. Pages 24-47 in: JA Morris Jr. (ed.) Invasive Lionfish: A Guide to Control and Management. Gulf and Caribbean Fisheries Institute Special Publication Series Number 1, Marathon, Florida USA. 113 pp.
Albins MA, Hixon MA (2008) Invasive Indo-Pacific lionfish Pterois volitans reduce recruitment of Atlantic coral-reef fishes. Mar Ecol Prog Ser 367: 233-238.
Hixon M, Albins M, Redinger T. “Lionfish Invasion: Super Predator Threatens Caribbean Coral Reefs.” NOAA’S Undersea Research Program. NOAA, 8 Mar. 2009. Web. 4 Feb. 2015.
“Invasive Species.” National Wildlife Federation. n.p. n.d. Web. 4 Feb. 2015.
“Lionfish- Pterois volitans.” Florida Fish and Wildlife Conservation Commission. n.p. n.d. Web. 4 Feb. 2015.
“Venomous Lionfish Invade South Florida Waters.” Lionfishhunters.org. n.p. 2010. Web. 4 Feb. 2015.

Exploitation and Cooperation by Cleaner Wrasse