There is an unavoidable interaction between seabirds and the fishing industry, which impacts them through feeding supplementation, resource competition, and incidental mortalities (McInnes et al., 2017).  However, resolving these problems is often difficult and requires many resources.  Sea-faring birds are attracted to the fish scraps that are discarded from fishing vessels, which oftentimes come from species that are not naturally a part of their diet.  Gaining access to this food source may cause an imbalance in food-web structure, allowing gull populations to inflate, or causing albatrosses to prioritize nutritionally-poor food due to its ease of capture (Foster et al., 2017).  Moreover, these fisheries may be targeting an important food source for these birds and decreasing their access to it.  Understanding the interactions between seabirds and fisheries is necessary for effective ecosystem management. 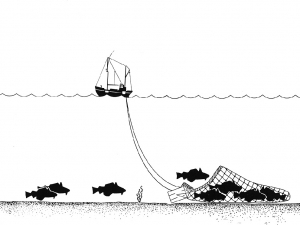 Figure 1:  A trawling boat fishing for bottom-dwelling fish to which birds would not normally have access. (Source: NOAA – en:Image:Trawling_Drawing.jpg, Public Domain, https://commons.wikimedia.org/w/index.php?curid=1232501)

In the past, the two main ways to assess seabird diet were looking at their stomach contents, and stable isotope analysis.  Unfortunately, neither of these methods yield species-specific results when it comes to what kinds of fish are in these birds’ diets.  Recently, a non-invasive process called DNA metabarcoding has been useful in providing high-level specificity in seabird diets when analyzing their waste products.  It is also a broad-scale technique, which increases the number of birds and populations that scientists can sample while decreasing the amount of work and time required to do so. 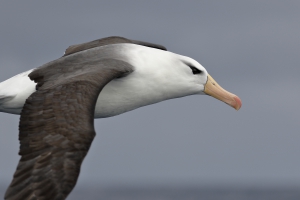 The black-browed albatross is found in the southern hemisphere, where its population has been significantly impacted by longline and trawl fisheries.  A group of researchers used DNA metabarcoding to assess 6 sites across their breeding range to determine their prey diversity over space and time, identify if any of their prey comes from areas in which there are known fisheries operations, and evaluate potential resource competition or food supplementation by fisheries.  Albatross waste was collected, and DNA was extracted from each sample, then cross-referenced with known fish DNA.  The researchers found that 91% of their diet consisted of bony fish, with a diversity of 51 species, but the overwhelming majority of birds mostly ate 4 primary species of fish.  Samples collected from the 6 breeding sites showed differences in bird diet between sites.  A few species of fish identified from the DNA barcoding only live in the northern hemisphere, indicating that these birds are sourcing this prey from fisheries that use those kinds of fish as bait.  Depending on the site, between 0-60% of the birds were consuming fishery discards.  A few breeding sites were negatively impacted by resource competition, where the fishery was targeting their food source and they therefore did not have access to their normal diets.  This study shows that DNA barcoding has provided a means for scientists to prove that improvements in discard management to reduce the number of birds that feed from these vessels would reduce incidental mortality and have major implications for some albatross populations (McInnes et al., 2017).

Plans for a new canal through the isthmus of Nicaragua have just been approved by the Nicaraguan government with little to no restrictions on what preexisting waterways can be used as part of this potential new shipping route. The currently proposed route was planned based on economic and technical considerations, but ecological concerns were not factored into the planning, leading to a variety of potential ecological problems due to the construction of the canal. These ecological detriments include overexploitation of the environment, increased water pollution, water flow modification, destruction or degradation of habitat, and the establishment and spread of non-native species. The currently proposed route is of special concern because it not only passes through Lake Nicaragua, a freshwater ecosystem of very high socioeconomic importance, but also because it connects two currently isolated drainage basins, the San Juan drainage basin and the Punta Gorda drainage basin. This study was conducted in order to establish a baseline of biodiversity in the two potentially affected drainage basins, as well as the surrounding basins, so that changes in biodiversity due to the construction of the new canal can be accurately measured and compared against previous levels. The researchers measured biodiversity by taking surveys of the fish in each ecosystem in question with nets, and then sampling two species each from three families of fish that are common in the area. These samples were then used in a DNA analysis, where common sequences of DNA from each species were analyzed for differences. In general, the more similar the DNA sequences, the more closely connected two populations are, and the less similar the DNA sequences, the less closely connected the populations are. Based on the DNA analysis, “populations within the same basin showed almost no genetic differentiation, whereas comparisons across basins exhibited higher differentiation.” This means that populations of fish within the same drainage basin are very similar to each other, while they are quite different from fish in other, unconnected drainage basins. They also found that Punta Gorda and San Juan have 27 species in common, but they also have 24 and 31 species, respectively, that only occur in one basin.

Diagrams showing connectivity between basins (A-C) and within different locations in the San Juan drainage basin (D-F). The sizes of the circles are proportional to the sample sizes, and the proximity of the circles to each other represent how closely connected they are genetically. (Härer et al. 2016)

Measures of biodiversity are important because they can be a direct indicator of how healthy an ecosystem is. In other words, a diverse ecosystem is a healthy ecosystem. Since the San Juan and Punta Gorda ecosystems contain populations that are so distinct from one another (which is one of the ways biodiversity is defined), the proposed connection between the two is potentially detrimental to the health of those environments because the physical barriers maintaining their diversity would be removed, thereby reducing their diversity and health. Because of these effects, the authors strongly recommend that the precautionary principle be used, and that a more ecologically sound route for the canal be chosen before starting construction.