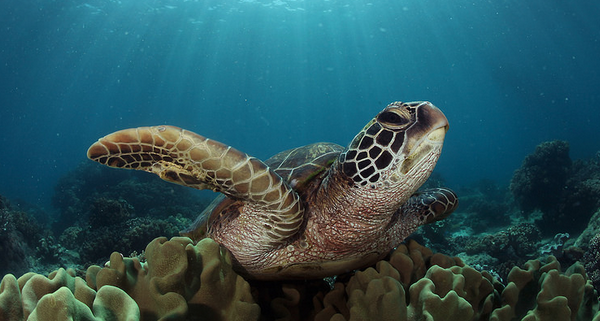 Sea turtles are notoriously difficult to study due to their large size and highly migratory behavior. However, a new technique is being utilized to help shed light on their habitat use and migration patterns. When looking at a sea turtle, oftentimes you are not just looking at a sea turtle. What you are looking at is an extensive community of micro and macro organisms that participate in complex interactions (Caine, EA 1986). Attached to the surface of the turtle’s shell are a wide variety of organisms that spend their entire lives traveling the seas with their turtle captain. These organisms, known as epibionts, are each a small piece of the puzzle that can be used to give us a more complete picture of the movement preferences of many species of sea turtles. Epibionts on sea turtles come from a variety of taxa and can range widely in size. Algae, tiny crustaceans, and barnacles of different species can be found on all seven different types of sea turtles and exert a wide range of effects. Barnacles growing on the turtle’s carapace might increase the drag felt my the turtle, making it expend more energy to more through the water but also provide it with camouflage while it rests on the ocean floor. Additionally, other epibionts may feed off of the parasitic epibionts benefitting the turtle (Robinson et al. 2017).

While describing the community structure of these hitchhikers is interesting, we can gain other useful information from them as well. By using just one species, the flotsam crab Planes major, a small crab ranging from 1-2 cm, scientists were able to gain better understanding into the amount of time different turtle species spent near the surface (Pfaller et al., 2014). Using three turtle species, loggerhead, green, and olive ridley, the study found that each species holds significantly different amounts of crabs on their backs. This suggests that the turtles are using their habitats in different ways. The flotsam crab is generally found in surface waters where it makes its home on (as its name implies) flotsam, drifting through the ocean. Therefore, green turtles, which were found to have a very low frequency of flotsam crab on their shell, most likely don’t spend much time at surface waters but mostly stay near the bottom to forage. Similarly, olive ridleys and loggerheads, which were found to have a high frequency of flotsam crab, most likely spend much of their time near the surface (Pfaller et al. 2014).

But this study was conducted using turtles from multiple different areas, what if that had a factor in the results? Another recent study proved that this most likely is not the case. Testing three species of turtles, green, olive ridley, and leatherback, from one nesting location in Costa Rica and using multiple different species of epibionts, it was concluded that each species of turtle does have its own unique community of epibionts (Robinson et al. 2017). All turtles sampled in the study came from the same beach yet exhibited large differences in epibiont diversity.  Leatherbacks, which forage far into the open ocean, were found to have much lower epibiont diversity than the other two species. This makes sense, as the environment that they spend most of their time in is largely uniform. Olive ridleys and green turtles, which occupy varying habitats of the open ocean as well as coastal waters, were found to have an increased level of epibiont diversity. Furthermore, certain epibionts were only found on one species of turtle (Robinson et al. 2017). Barnacles encrusted on a sea turtle By U.S. Fish and Wildlife Service Southeast Region (Barnacles on Carapace Uploaded by AlbertHerring) [CC BY 2.0 (http://creativecommons.org/licenses/by/2.0) or Public domain], via Wikimedia Commons

All of this gives credence to the use of epibionts for habitat and migratory use. Sea turtles use such large habitats, that it is difficult and expensive to attach satellite trackers to large numbers of them. Epibionts can be used as miniature tags, showing us where a turtle has been. Say an epibiont that is only found in a certain area is found on the back of turtle, then we know that the turtle has visited that area recently. This is important for fisheries management. One of the main causes of turtle mortality is from bycatch, when fishing boats catch nontarget species and they die in the process (Wallace et al. 2011). Now that we can gain more and more information about their migratory habits, we are better able to identify hotspots that turtles are likely to visit in their travels and properly protect them. We can also now do this affordably, as no tags need to be used. With this new technique we can help to better protect sea turtles with the help of these little creatures.