Between 1963 and 2014, scientists in Japan have conducted 45 years of near continuous monitoring of the abundance (number of individuals), species richness (number of species), and developmental abnormalities of the sea urchins around Hatakejima Island. Hatakejima Island has been a marine protected area since 1968, meaning that humans are forbidden from harvesting sea urchins in the area. Removing fishing pressure makes this area the ideal study site to examine the effect of abiotic factors such as sea surface temperature and red tide events on sea urchin population dynamics, which is important since echinoderms (the family containing sea urchins) are often keystone or dominant species in an ecosystem. 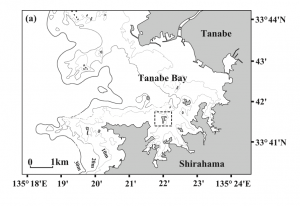 Urchin populations near Hatakejima Island were monitored using three complementary methods. The first was a quadrat study, where the urchins in a permanent underwater quadrat were counted once every year. The second was a coastal survey, where a more general sea urchin count was conducted all along the coast of Hatakejima Island six times total. The third was a developmental assay, where eggs and sperm were collected, fertilized in vitro, and the resulting embryos were monitored for early developmental abnormalities. Overall, the scientists found that the sea surface temperature increased over thirty years, and that developmental abnormalities coincided with the occurrences of red tides. 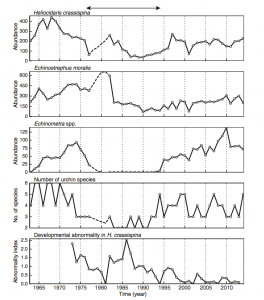 Figure 2. Population trends of the three most common species of urchin from the study over time. (Source: Ohgaki et al., 2018)

Red tide events, temperature, and ocean currents were found to be closely related to the abundance of the three most common species of urchin: H. crassispina, E. moralis, and Echinometra spp. Exact effects varied depending on species, but red tide events were found to decrease abundance (likely due to the developmental disruption of urchin larvae), while warmer temperatures and proximity to the Kuroshiro current had positive effects on abundance and species richness.

Although this population of sea urchins is not subject to fishing pressure, it is far from unaffected by humans. An increased incidence of red tide events in the area may be attributable to an increase in aquaculture nearby. Furthermore, chemicals like tributyltin (TBT) and other organotin compounds used in fish nets and ships are being introduced to the water, which may also have negative developmental effects that decrease population size. In addition to the other human effects, anthropogenic climate changes also affect urchin abundance and species richness in this area because of their dependence on a particular temperature range. Studies like this one are essential to determining the full extent of human impacts on ecosystems, and should continue to be employed so we can decide how best to mitigate those impacts (Ohgaki et al., 2018).

Albatross-born loggers show feeding on deep-sea squids: implications for the...