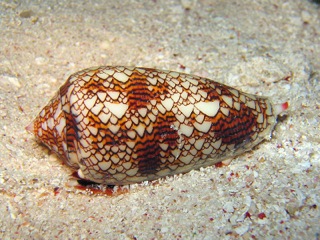 Oceans cover over 70% of the earth’s surface. Some of the greatest biological diversity in the world is found in the seas. Over 200,000 species of invertebrates and algae have been identified, and this number is estimated to be only a small fraction of what is yet to be discovered. This immense biodiversity yields great chemical diversity. When working with potential pharmaceuticals this becomes extremely important, more chemically diverse substances are more suitable. The field of marine natural products is just over 40 years old and already over 15,000 chemical compounds have been identified as having biological function.

Many of these chemicals have cancer fighting potential. Many sessile organisms emit chemicals to prevent others from evading their space. Often times these chemicals are used to slow and prevent cell growth of surrounding sponges, etc. It is believed that the same chemicals these organisms let out when competing for space can be used to stop the uncontrolled division of cancer cells. Cancer treatment compounds have advanced quite a bit due to funding from the National Cancer Institute. Discodermolide is a polypeptide isolated from deep water sponges (Discodermia). This substance stops the reproduction of cancer cells by disrupting the microtubule network (partially responsible for movement of cells). Bryostatin, a substance released by some bryozoans, is believed to be particularly useful against leukemia and melanoma. The Caribbean mangrove tunicate produces a compound (Ecteinascidin-743 or ET-743) that has been tested in humans for the treatment of breast and ovarian cancers and found to be effective.

While cancer fighting treatments have received the most attention, discoveries have been made in many areas. Increased understanding of the highly specified modes of activity of these chemicals and their roles in the natural world allows scientists to better understand their use to humans. Many of these compounds are on the route to approval, and in the near future we will start to see a surge of marine pharmaceuticals. Filter feeders are constantly circulating water and small organisms through their system, thus they are continually exposed to parasites and disease causing bacteria. The chemicals they use to defend themselves could also be of use to humans. Ziconotide, a cysteine rich peptide, has been found to fight against neuropathic pain. These toxins, derived from the cone snail, are approximately 1,000 times more powerful than morphine. The sponge Petrosia contignata produces a strong anti-inflammatory with the potential for asthma treatment. Another group of anti-inflammatories comes from Caribbean soft corals and sea whips. These are used to reduce swelling and skin irritation. The use of marine chemical resources does not stop with pharmaceuticals. They can also be found in nutritional supplements, cosmetics and more. Toxins from cone snails have been found to fight against neuropathic pain.

It is clear that the ocean has enormous medicinal potential. Unfortunately there are a number of obstacles preventing this potential to be reached in full. One of the biggest problems is simply the lack of supply. Underwater compounds are more difficult to reach than those on land. SCUBA and submersibles make it easier to access these resources, however, oceanographic expeditions are quite expensive. Also, in order to use these compounds effectively collections need to be done in very large quantities. Large scale harvests are often deemed ecologically unsound. Because collection is almost always not an option alternatives such as aquaculture and chemical synthesis can be used. Aquaculture has been completed successfully, however it is difficult because little is known about the invertebrates. Chemical synthesis is thought to be the ideal solution, giving pharmaceutical companies ultimate control. However, this process is extremely costly, complex, and has a very low yield.

Another complication deals with political boundaries. The most diverse regions are located in areas of developing countries. These are precisely the areas that the more developed nations wish to explore. Developing nations are often nervous about being used, and thus hesitant to allow exploration. National and international regulations regarding access and extraction of natural resources are then discussed. This presents difficulty when placing value on a natural resource, including any value added to the resource through its use as a pharmaceutical and the value it has initially in the ecosystem.

Because of these difficulties, many pharmaceutical candidates remain untouched. On the bright side, currently there are large databases of chemical compounds. Our understanding of biological activity linked to these compounds is increasing. At the same time knowledge of human diseases is increasing at rapid speed. We can combine this knowledge and apply it to drug discovery and disease treatment.