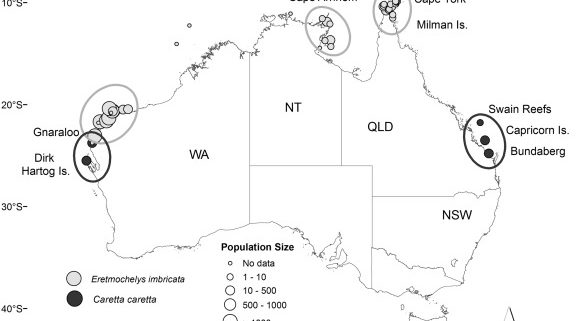 Climate change has become an increasing threat to species across the planet. With hotter average temperatures and less predictable weather patterns, humans have undeniably influenced the global climate. The effects of a changing climate are translated to the ocean, where warmer sea surface temperature and rising sea level can alter the marine ecosystem on many levels. These changes can decrease biodiversity and alter the balance of marine ecosystems (Fuentes et al. 2010). These far-reaching effects have extreme consequences for marine life, but some species are impacted more than others. Sea turtles are heavily affected by climate change because of their wide range of habitats (Butt et al. 2016). Since sea turtles lay eggs on beaches but spend their lives in the ocean, they are affected by climate change on both fronts. In addition, climate change may affect survival of juvenile sea turtles, decreasing adult population numbers. Since sea turtles can be widely affected by the far-reaching effects of climate change, it is necessary to implement measures of protection for them. There are ongoing research projects to determine how climate change directly impacts sea turtles and what the best policy options are to combat these effects. This is important because there is little information on how to protect these species from the effects of climate change.

Over the past forty years, sea level has risen at an average of 2mm each year (Butt et al. 2010). This is an alarming statistic especially for low-lying and coastal areas. This is also bad news for sea turtles, which lay their eggs on beaches, which have already been affected by rising sea levels. Beaches are at a high risk for flooding from sea level rise, and when this does occur, the sea turtle eggs are washed away or swamped (Perez et al. 2016). This is especially devastating for endangered species of turtles such as the Hawksbill Turtle or the Australian Loggerhead Turtle, whose numbers are already low and cannot afford a sharp decrease in reproductive output (Butt et al. 2016).

Another major threat to sea turtles is rising sea surface temperature. One of the major effects of climate change is an increase in air temperature, which correlates to an increase in sea surface temperature. This excess thermal stress has especially hard consequences for reptiles, who are exothermic animals that rely on outside temperature to regulate their internal temperature (Perez et al. 2016). An increased sea surface temperature creates a more stressful environment for the sea turtles, but the increased sand temperature has proven to be even more harmful. Since sea turtles lay eggs on beaches, the hotter sand leads to less ideal conditions for laying eggs, which leads to decreased reproductive output. In addition, the sex of the embryos is partially determined by the outside temperature. In this case, a warmer environment leads to a higher percentage of females. It has been estimated that a 2°C increase will lead to a 99.86% female hatching rate (Butt et al. 2016). This, of course, will lead to a very lopsided sex ratio within sea turtle populations, further decreasing the reproductive output and population size. The image shows all of the nesting sites identified in Australia. This shows that sea turtles have a wide range of habitats. This is beneficial because it allows policy makers to protect certain beaches where sea turtles are known to use for nesting. (Source: Butt, N., Whiting, S., & Dethmers, K. (2016). Identifying future sea turtle conservation areas under climate change. Biological Conservation, 204, 189-196. doi:10.1016/j.biocon.2016.10.012)

All of these threats to sea turtles could have devastating effects on their populations. Decreases in sea turtle populations have already been observed, and most sea turtle species are already on the endangered species list. Due to the fact that sea turtles are dealing with a multitude of threats, it becomes increasingly difficult to find management techniques to combat these issues (Fuentes et al. 2010). Some of the more straightforward strategies deal with the sea turtle’s habitat on land, since it is easier to manage beaches than the open ocean. Since sea turtles rely on certain beaches for nesting, it is possible to protect these areas to preserve the nesting habitat (Fuentes et al. 2010). This has already been implemented in many coastal areas, where nesting sites are blocked off from public use. In addition, many coastal areas have regulations to control nighttime lighting near nesting beaches so the sea turtle hatchlings have a better chance of making it to the ocean. By protecting these important nesting areas, sea turtles will continue to be able to lay eggs safely, and more hatchlings will survive to adulthood. This will lead to an increase in sea turtle population, thus preventing their numbers from decreasing even more rapidly.

In addition to managing habitat on land, it is also important to protect sea turtles in the ocean. One way to do this is to implement marine protected areas in important habitats for the turtles, such as areas where their young mature. However, the main issue affecting sea turtles is climate change, and this must be dealt with at a larger scale. To reduce the overall impact of climate change not only on sea turtles, but every other species, it is necessary to reduce the emissions of greenhouse gases and create a more sustainable way of life. There have already been steps made towards this goal, including the Paris Climate Accord, along with numerous clean air emission standards, but it is not enough. Stricter environmental regulations and environmental conservation education will help reach a more sustainable life, as well as protect sea turtles along with a multitude of other species

The Impact and Epidemic of Overexploitation on Chambered Nautilus Populatio...
Scroll to top