Some of the major questions we are currently investigating include:

1. What restoration techniques result in the highest productivity and survival rates for staghorn coral?

2. How do genetic differences between coral colonies affect the survival and growth patterns of restored staghorn corals?

Beginning in the 1970s–1980s, restoration efforts began to focus on restoring the biological and ecological function of coral reefs by transplanting coral fragments or colonies (Maragos 1974, Bouchon et al. 1981, Abelson 1982, Harriott and Fisk 1988). At present, one of the most commonly used coral propagation and restoration methods is “coral gardening” (Rinkevich 1995, Bowden-Kerby 2001, Epstein et al.2003, Shafir et al. 2006, Shafir and Rinkevich 2008, Shaish et al. 2008). This method, adapted from terrestrial silviculture, consists of removing a limited amount of tissue and skeleton (from a few polyps to small branches) from healthy wild coral populations and propagating an initial stock within underwater coral nurseries. Nursery-grown colonies produce a sustainable stock of corals which can then be transplanted to degraded reefs without the need for continuous collections from wild populations (Rinkevich 1995, 2005, Epstein et al. 2001, 2003, Soong and Chen 2003).

Coral gardening methods have been increasingly implemented in the Caribbean and target fast growing branching corals such as the staghorn coral, Acropora cervicornis (Lamarck, 1816) and elkhorn coral, Acropora palmata (Lamarck, 1816), which were once the dominant reef-building taxa in the region. Due to the combination of biological and human induced stressors, Acropora has suffered significant degradation with estimated population declines of up to 95% in some areas (Porter and Meier 1992, Bruckner 2002), leading to their listing as threatened in the US under the Endangered Species Act in 2006 (Hogarth 2006) and as critically endangered in the International Union for Conservation of Nature (IUCN) Red List of Threatened Species in 2008 (Aronson et al. 2008, Carpenter et al. 2008).

The first University of Miami underwater coral nursery was established in 2007 and efforts were expanded to include a second nursery in 2009 to create a network of nurseries along the Florida Reef Tract with the common goal of developing science-based sustainable restoration practices and contributing to the recovery of Acropora populations. While restoration efforts may pale in comparison with the potential scale of natural recovery, propagation and restoration activities utilizing productive coral nurseries have been expanded to ecologically meaningful levels in the past 5 years and are beginning to have a considerable impact on the localized recovery of coral reefs. In addition, information gathered during our research has been used to increase educational outreach programs to involve local communities in active conservation of their marine resources as well as to develop management plans to help protect current and future Acropora populations. 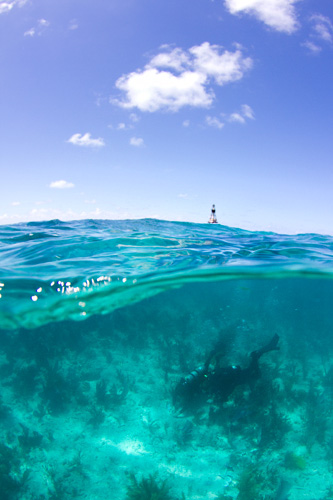 The University of Miami’s underwater coral nurseries are located offshore of Elliot Key located in Biscayne National Park near Miami, Florida and Key Biscayne, Florida. These nurseries were built using two types of nursery structures, cinderblock platforms and coral “trees.” Small pieces or fragments (up to 30 cm or 11 inches total length) are collected from healthy, wild (parent) staghorn colonies. The collection of small fragments does not harm the parent colony and coral branches heal and regrow within 6 months after collection. Fragments are transported by boat to the nursery where they are attached to the cinderblock platforms with underwater epoxy or to the coral “trees” with small plastic cable ties. Some colonies can grow up to 3 meters a year resulting in lots of healthy coral in the nursery. Over time, nursery colonies are fragmented or cut into smaller pieces to create new colonies and thus increase the number of corals available to use for restoration. While in the nursery, corals are measured using a ruler to determine the total linear extension of each individual corals. This data provides researchers with specific information about genetic differences between corals, growth rates, branching patterns, and how each coral responds to environmental stimuli such as temperature, predation, or currents. In addition to measurements, nursery platforms are cleaned using a wire brushes to remove encrusting organisms such as macroalgae, fire coral, hydroids and sponges which compete with corals for space and may reduce growth rates.

Once the corals have grown and are ready for outplanting, small colonies are collected from the nursery while leaving other colonies to continue growing for future outplanting. Colonies are carefully transported to the restoration site via boat. Restoration sites are chosen based on specific characteristics such as water quality, absence of predators, and the current or historical presence of existing staghorn colonies. Using nails hammered into the reef, colonies are secured with underwater epoxy and small cable ties. Within 3 months, the corals will attach themselves onto the reef by growing healthy tissue over the nails, cable ties and onto the reef substrate thus becoming a “natural” part of the reef community. Additionally, coral predators, such as corallivorous snails and fireworms, are removed from the restoration site to reduce stress while the corals are acclimating to their new environment.

Using the framework of Dr. Neil Hammerschlag’s Shark Citizen Science Program, participants of the Rescue a Reef program will have the opportunity to join researchers from the Benthic Ecology Lab at UM RSMAS in reef restoration excursions. These excursions will include SCUBA diving or snorkeling at our established coral nurseries, conducting basic nursery maintenance (i.e., scrubbing away macroalgae and fouling organisms from nursery platforms with wire brushes, fragmenting corals with pliers to create new nursery colonies, and attaching fragments to nursery platforms and PVC coral “trees”), collecting corals for transplantation, and assisting in outplanting nursery corals at local reef sites as part of ongoing coral restoration activities. In addition, participants will have access to an online Virtual Expedition which will provide more information about the coral nursery and restoration process. 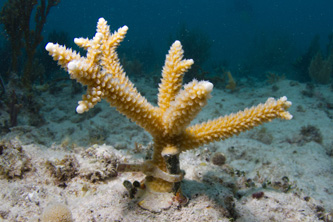 So far, we have outplanted roughly 600 meters of healthy coral onto local reefs!

During each visit to the coral nursery, environmental measurements are taken to provide information on water quality which is important for coral growth. In addition, the total linear extension is measured for each coral in the nursery to document growth rates. The measurements of each branch are combined to create the total linear extension. The number of branches and overall condition of each coral is also documented. Such data then becomes part of a database used to track the success of nursery and restoration activities. Information is provided to other researchers through manuscripts published in journals or presentations at scientific meetings, to the community through outreach programs, and to governmental or management agencies via annual reports. 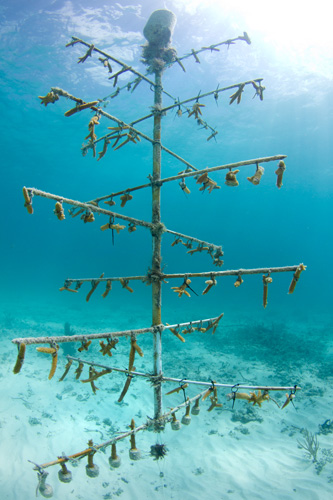 Currently, the two UM coral nurseries house almost 1,500 corals and maintain highly productive growth rates. Our nurseries have produced over 350 linear meters of Acropora roughly the equivalent of 30 times the amount of coral originally collected from parent colonies. The successful production of so much coral has allowed over 1,800 corals to be outplanted from UM’s coral nurseries to 21 sites throughout Miami-Dade County since 2012. This equals roughly 600 meters of healthy coral outplanted to local reefs! Researchers were able to determine best propagation techniques and outplanting methodologies to improve growth rates and survival of outplanted corals. For example, UM researchers have documented 92% survival of all outplanted corals! In addition, valuable genetic information has been gathered about current Acropora populations in Miami-Dade County which will improve outplanting strategies in the future. And, both nursery and outplanted corals have been observed to spawn indicating that propagated corals are healthy and are successfully contributing to sexual reproduction which will greatly improve natural recovery through time. 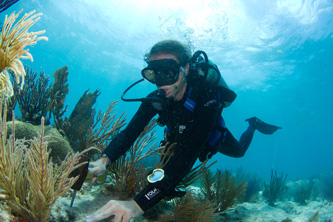 UMiami coral researchers have documented 92% survival of all outplanted corals!

Understanding predator-prey relationships is important for developing ecosystem models which can be used by wildlife managers to help predict how human disturbances or changes in the environment may impact ecosystem dynamics. 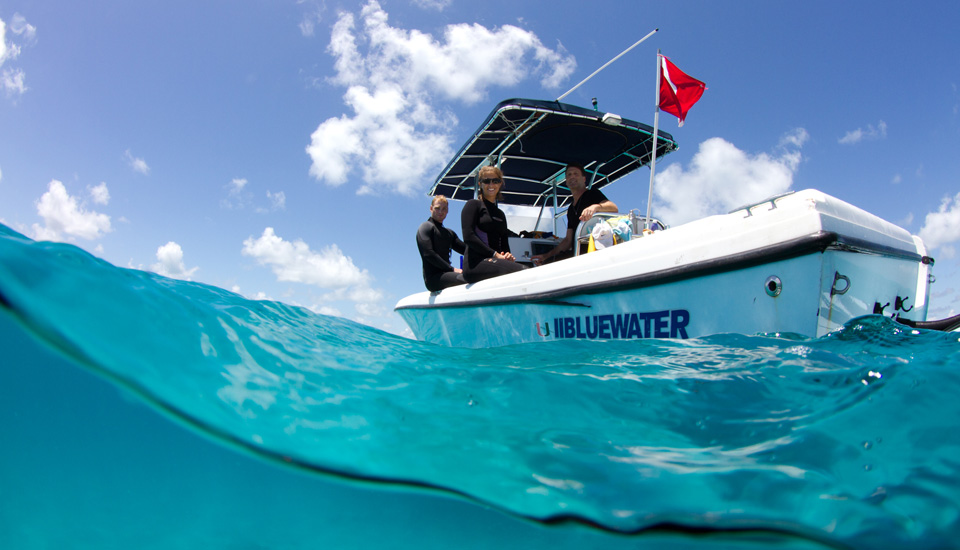 To raise awareness and educate the local community about the status of coral reefs and current restoration projects, we have developed the Rescue a Reef program under the Shark Research & Conservation Program. Our Rescue a Reef excursions will engage Citizen Scientists and local students by teaching basic coral reef biology and ecology and allowing them to assist UM researchers at the coral nurseries and restoration sites with propagation and outplanting tasks. Participants will gain hands on experience with basic nursery maintenance and outplanting techniques at local reef sites as part of ongoing coral restoration activities. In addition, access to an online Virtual Expedition will provide our Citizen Scientists with additional information so they can learn more about coral reefs and how they can continue to help protect these important marine resources. In addition, educational outreach programs will encourage coral reef conservation via local school groups and provide online classroom curriculums and other educational materials.